On The Anniversary Of The 2019 November Uprising In Iran

“We are protesting against problems in the whole system in general. We reached a crisis where we noticed that the system cannot handle it anymore.”

In mid-November last year, tens of thousands of people in over 100 cities across Iran took to the streets for five straight days. The uprising was in response to the overnight, three-fold increase of fuel prices, a policy recommended by the IMF and implemented through wanton state violence. The Revolutionary Guard, Basij[3], and the police killed 304 to 1500 people under the cover of an internet blackout[4]. Thousands of militants, activists, and ‘ordinary’ people were arrested either during or in the aftermath of the uprising, some of whom have been tortured, condemned to long sentences, and even executed. Yet, the dispossessed spontaneously staged occupations of local areas, built barricades, burned down several banks, and defended themselves the best they could against a state apparatus designed to systematically repress its ‘citizens’. In order to commemorate the first anniversary of the November Uprising, we attempt in the following to reflect on this political event while drawing out some lessons for the ongoing struggles in Iran and the Middle East. 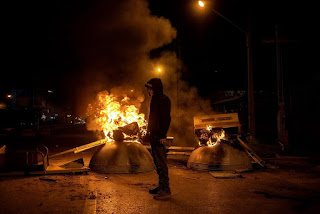 Those who rose up from the infernal depths of the social hell in Iran were fed up with the Islamic Republic of Iran (IRI) as a whole. Like the proletarians who shaped the global wave of struggles in 2018-2019, the participants of the November Uprising came to the conclusion that  “their future depends upon putting an end to a system that reproduces itself through exploitation, mass poverty, and the ever increasing commodification of the very basic means of life”[5]. That said, the crisis the IRI is now grappling with cannot be simply put down to the ‘crisis of legitimacy’. Nor are the US sanctions the sole cause. Rather, it is the question of a crisis of ‘governmentality’[6], that is, a socio-economic-political-ideological crisis aggravated by consequences of global warming and now compounded with the epidemiological crisis of COVID-19. The IRI can only resort to violence in order to silence millions of people are deprived of basic democratic rights and of the very basic means of social reproduction (housing, healthcare, education, employment, breathable air, and drinkable water…). Thus, the brutal repression of the November Uprising brought to light both the depth of the crisis and the degree of radicalization among the youth whose social existence has become increasingly unbearable. In some cities, and especially those inhabited by the racialized ethnic ‘minorities’ such as Arabs or Kurds, government tanks rolled through the streets while affiliated governmental forces employed heavy machine guns like the Dushka (DShK)[7]. Now, although the IRIhas its origins in the violence that inheres in every project of statecraft and continues to structurally depend on the violence proper to an authoritarian regime, the repression of the November Uprising was both shocking and unprecedented – the likes of which Iran’s domestic population has not seen since 1989, with the IRI’s consolidation of power in the wake of the Iran-Iraq War.

Given the unprecedented nature of state violence, the current situation in Iran is becoming more and more like the original phase of the IRI(1979-1989) when systematic state-violence was employed as a means of establishing the regime. Put in other terms, the power of the Islamist ‘revolutionaries’ could not have been consolidated without the ethno-nationalist war declared by Khomeini on the ethnic ‘minorities’ like Kurds, Arabs, and Turkmens; without the patriarchal war launched on women and their bodies (most obviously, the compulsory hijab); and of course without the massacre of thousands of political dissidents in prisons during the first decade of the post-revolutionary era. The current ‘return’ of this earlier era expresses itself best in the images and videos showing the police directly shooting demonstrators in the chest and the head during the November uprising, as well as in the regime’s executions of ‘ordinary’ people in the months that followed. And this in the context of its vastly shrinking support base compared to its earlier days.

The revolution will not be televised

The Islamic Republic is suffering from mass uprisings at a chronic rate, with every subsequent mobilization being more confrontational than the last. The November uprising in 2019 was much more widespread and ‘militant’ than that of 2017-2018, when leftist students in Tehran expressed for the first time the negation of the system as a whole: “reformists, hardliners, the game is over!”. More importantly, the IRI is encountering ever-increasing struggles and movements of workers, students, teachers, retirees, women, and ethnic and religious minorities. These two ‘levels’ of struggle – the spontaneous mass uprising and the more organized forms of resistance – are mutually interrelated. The former has radicalized the latter, making it more political than before. For instance, the demands of some parts of the working class have moved away from the improvement of the conditions of work, wages, and de-privatization and towards the autonomous management of factories and radical alternatives.

Unfortunately, both the crushing effects of the crisis and the political subjectivity of the oppressed are under- or misrepresented in the news media. Insofar as political agency is concerned, it is only via the figure of the human rights activist that narratives of political subjectivity find their way into the media. Meanwhile, the mainstream media often misrepresents the crisis as a product of the US sanctions, while in reality neoliberalism in Iran is structured by the systematic corruption of its ‘rentier’ ruling oligarchy as well as the integration of its economy within global capitalism. However, this is not to say that the imposed economic sanctions were insignificant, thereby underestimating its extremely destructive and negative impacts on the millions of lives in Iran. To the contrary, the current set of economic sanctions have not only deprived people of access to basic medicines for chronic illnesses, they have also effectively contributed to the spiralling depression of the Rial on the world-market. Economic sanctions have definitely intensified the crisis, yet they cannot be considered as its fundamental condition and ultimate cause. In spite of this fact, the IRI’s ideological strategy for justifying the economic crisis is to project all ‘domestic’ problems as ‘geo-political’, thus as problems originating outside of Iran and resulting from the actions undertaken by its imperialist enemies.

Despite the very real and reactionary threat posed by the imperialist powers, what needs to be properly addressed within the internationalist left is the IRI’s claim of being an ‘anti-imperialist’ state. Ever since the 1979 Revolution, the ruling classes in Iran have gained legitimacy through a manipulative ‘anti-imperialist’ discourse whereby the geopolitical interventions of the Revolutionary Guard (IRGC) in the region is justified as a deterrent to the US imperialism and its allies (particularly Israel and Saudi Arabia). This discourse gained a new momentum after the US imperialist atrocities in Iraq and Afghanistan and the consequent intensification of geopolitical rivalries in the region. It is this long-standing propaganda that has fooled certain fractions within the global left, essentially turning them into supporters of the IRI[8]. The ‘pseudo-anti-imperialists’ on the left either turn a blind eye to political repression and dispossession of people inside Iran or they acknowledge the ‘internal’ problems but effectively minimize them by maintaining that the ‘axis of resistance’ has a ‘priority’ over the ‘internal’ antagonisms within Iran, as if the IRI were a genuine anti-imperialist force…

These pseudo-anti-imperialists formulate the problem as a false binary: either we have to choose the camp of Iran, Assad, Hezbollah, and Russia/China or we are faced with the global empire of the US and its allies. They gloss over the IRI’s interventions in Iraq, Lebanon, Palestine, Syria, and Yemen, be it direct or indirect, through its military, economic, and ideological-political support of reactionary forces such as al-Ḥashd ash-Shaʿbī, Hezbollah, Hamas, Assad, and the Houthis. Pseudo-anti-imperialists oppose the US imperialism by uncritically defending the regional interventions of the IRI. The point, however, is not to ‘choose’ between the two monsters but rather find a ‘third way’ that goes beyond this false dualism. The October Revolution in Iraq[9] and the ongoing struggles in Iran paves the way for such an alternative by refuting both the IRI and its mercenaries on the one hand and the United States on the other. If the left believes in internationalism, then the ‘anti-imperialist’ mask needs to be taken off from the IRI’s persona. This can be done by lending voice to the struggles inside Iran and exposing the atrocities of the regime in the region, whilst simultaneously opposing the global empire of the US, China and Russia.

[1] We would like to give our special thanks to Jose Rosales who, comradely and generously, edited the text and made precious and insightful comments.

To contact the collective, drop an email to collective98@riseup.net.

For further details on Collective98, see:

[2] See the statement written by the Iranian diaspora and signed by more than 170 leftist militants and academics across the world:

[3] Militia organization of the IRGC

[4] The real number of the victims is not clear. The Amnesty has announced 304 but Reuters 1500 people. See the following links:

[6] See the interview with the two Iranian, anonymous comrades by one anonymous American comrade:

[7] This happened in Mahshar, a majority-Arab city in the province of Khuzestan in the South of Iran which has a key strategically economic petroleum site. The protesters blocked the main road to this site. Another example is the video published on social media showing the Basij militia directly shooting the Kurdish protestors in Javaanrud, a Kurdish city in Kermanshah province.

[8] See the catastrophic article published in the ‘radical-left’ French platform in which General Soleimani was presented as a ‘hero’ who fought against the ISIS and the imperialist forces in the region:

Email ThisBlogThis!Share to TwitterShare to FacebookShare to Pinterest
Labels: English